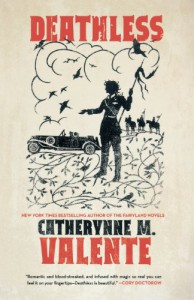 the silence at four a.m.

a warm day at the ocean, salt crusting like dried tears on my face

a glass vodka kept in the freezer, poured over a compote of cucumber in the middle of summer

An amazing opening; one that lets the reader know the magic of names and the beauty of language and juxtaposes it with reality. Valente has taken the timeless part of fairy tales, the “long, long ago and far, far away…” away and rooted her love tale in Russia during the time of Stalin and eventually the war with Germany, although “there is always a war.” The story is about Marya Morevna, her first husband Koschei the Deathless, and her lover Ivan. Based on a fairy tale, in one of the original versions, Marya has chained Koschei in the basement. Married to Ivan, she forbids him from the basement, but like all fairy-tale lovers, one day he disobeys. In the process he sets Koshei free, who heartlessly repays him by stealing Marya away. Ivan must track down Koshei’s hidden death before he can free Marya.

Valente, however, tells the story from Marya’s point of view. But this is no simple fairy tale re-telling; this is the very idea of a fairy tale reduced to its components than put back together as a whole. This is the before story and the after story, as much as the untold one.

There are familiar elements to anyone wide-read in fairy tales; Baba Yaga, of the house with chicken legs, and the Baba Yaga with the flying mortar and pestle; house-spirits that require nourishment of one form or another for protection; offers to teach from an elderly crone of suspicious intentions; a horse that transforms physique and personality depending on the time of day; princes disguised as birds that come courting sisters; a sorcerer’s death hidden in a jeweled egg; a trip that involves three different houses in the woods, and three different sisters, and a set of tasks that require cleverness and friends to complete.

But its essence is a story about love, need, self, and dying.

Characters, as always with Valente, come alive in creative ways, from Marya's many mothers, to the Tsarina of Ill Luck, to the gun-girl, and the swan-woman. I especially enjoyed Baba Yaga, who retains her old, intimidating and carnivorous ways: “Husbands, lie, Masha. I should know; I’ve eaten my share.” She also has a humorous way of refering to Marya in soup-pot terms that echo the fierce Baba Yaga in tales: “Listen, soon-to-be-soup.“

I continue to adore Valente’s writing style, a poetic sort of descriptive writing that is always looking for deeper truths. The format of the fairy tale is well-suited to her style. Particularly, there’s frequent use of the traditional repeated encounter that is just a little different each time, teaching the protagonist something more:

“Olga kissed his beak and drew him away with her, crooning and chirping to him in the soft, secret language of the wed.”

“Tatiana swatted his wing and coaxed him away with her, warbling and clicking to him in the bright, squabbling language of the well-matched.”

“Anna smiled at him, her face lighting like an oil lamp, took his wing and walked back towards the house, croaking and cawing to him in the strident, ordered language of the incorruptible.“

Complicated, disjointed, there are perhaps not as many transitions as I would have wished and an abundance of small stories that don’t always connect. Though Valente perfectly captures complex emotion, the allegories and flights of imaginings don’t always come clear to me. I’m left with the feeling of being sure something is significant, but not exactly why.

The Acknowledgements thank Valente’s husband Dmitri and his Russian family, leading me to wonder if Valente was writing parts of her own relationships. All I could think when reading this is that Valente too must know the unhappiness and beauty of mismatched love. Haunting, beautiful, and like Mayra, it leaves me just a little hungry, wanting more.

“She had not known before that she wanted all these things, that she preferred dark hair and a slightly cruel expression, that she wished for tallness, or that a man kneeling might thrill her. A whole young life’s worth of slowly collected predilections coalesced in a few moments within her, and Koschei Bessmertny, his lashes full of snow, became perfect.“