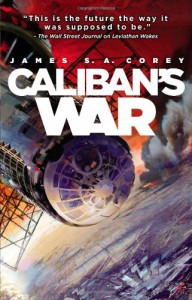 Leviathan Wakes was one of my great reads this year (review: http://carols.booklikes.com/post/326388/post ). It broke into my reading blahs and set off a trend of great reads. After finishing, I promptly placed a library request for Caliban’s War, out of general interest and just the tiniest bit of series OCD. When it arrived, I was in the middle of monthly reads for my book club, then all hell broke open over at Goodreads, resulting in a loss of reading mojo, quickly followed by reviewing mojo. Bridge of Birds brought me back to reading, but my reviewing despondency has lingered.

Caliban’s War fails to live up to the fun, plotting or consistency of Leviathan Wakes, though the writers tried their best by slapping a new cover on a heavily recycled version of the Leviathan. Narrative again begins with a point of view from a female character who won’t be heard from again, but will serve as the object/grail for obsessive male questors as they careen through space. Again, we have Jim Holden surrendering to his Tourette syndrome tendencies as he tilts at windmills and volunteers for suicide missions. Unsurprisingly, we also have the protomolecule, spaceships, and a Mars versus Earth versus Belters conflict.

Quite honestly, it was only because I was fast running out of library time that I bothered to give this a shot at all. Which I’ve discovered is one of the only complications with my resolution to use the library (a somewhat forced resolution that started after realizing I still prefer paper to e-reader and that I was fast running out of physical space unless I wanted to sleep on paperbacks. Preferably ones worn soft by time and handling). Even when a book comes in within the week, I don’t always have the immediate inclination to read it. Heaven forbid that it take months to get to me (as all of Tana French‘s books do), because by then, I may well have lost any motivation or enthusiasm for the book. Incidentally, the loss of interest is absolutely not true of French’s books. It’s just an example of a series that is guaranteed to take two months or more for the library to fill. However, I digress. Once those books get to me, they can end up languishing on my shelf until I run through my permitted renewals. I’m either forced to admit reading defeat or give it ‘the ol’ college try’ in an effort to peak interest. Or at least screen it out so that I don’t waste my or my library’s time again.

I listlessly read through the first few chapters, and then a few more. I don’t know why I torture myself this way–I really, really don’t. Except I was in the midst of Goodreads blahs, so why spoil one of the books I was saving (hello, Girl Who Fell Beneath Fairyland) with my perfunctory attention? The plot ended up grabbing me, just a little, and two characters ended up grabbing me a little more–Bobbie, the female Polynesian Martian marine and the elderly but feisty Earthen Undersecretary to U.N. Avasarala.

But it all felt so contrived and self-conscious. Even the characters I had a mild affinity for had annoyances. The Undersecretary had a habit of vulgar epithets, supposedly all the better to shock her fellow diplomats but which was complete bullshit and was likely supposed to be some half-assed comic relief (intelligent elderly ladies swearing!! Funny!) The Marine and her internal monologue were interesting, but she mostly served as the convenient physical heavy in a group of poorly-equipped do-gooders.  Oh, and how can I forget–she was a sexual object for the guys as well. However, something felt off about her characterization. It wasn’t quite congruent, and she was at times very aware of the attractions others had for her, and at times completely unaware, such as when she stripped to get into her suit. It was an odd combination that didn’t square up, and felt a little too much like what a male thought a woman would think. Undoubtedly, had Corey been a female writer, I would have guessed that she was a little bit crappy at characterization and forgot that she didn’t want to make her straight-forward character sexually manipulative. (I wonder–is that sexist of me?)

The general plot of chase-the-missing-girl and prevent-the-bad-guys-from-getting-her/starting-the-apocalypse was just so… meh. Kind of uninspired, and that’s really not the reaction you should be getting if your story has spaceships, gunfights, hostile governments and alien monsters. This seems to me to be time for the authors to rethink their collaboration strategy. Particularly, switching narrative POV each chapter and general plotting. This time they couldn’t balance the personal (save the girl!) with the political (save the universe!). Frankly, I was ready for the protomolecule to take over the universe, because at least the writers would have to come up with something interesting.

The language itself is uninspired. It wasn’t clunky, but neither did it soar or amaze, except with sections from Prax, the botanist who was leaving his underground environment for the first time. Eventually, that too annoyed me, as the writers saved all their “intelligent-sciencey-thoughts” for his character, so throwing in the artistic musings as well just made it feel even more like they were relying on profile cheat sheets of characters. The scientist/dreamer. The brave captain. The loyal female first mate with a true love. The semi-pathological crew member that can acts as an insider into the underworld. The mechanical savant. (Did I just describe Firefly without the escort?)

Ultimately, I don’t know that I’d suggest reading it, even if you loved Leviathan Wakes. Unless, of course, you loved Leviathan Wakes so much that want to read it again, in a watered-down less creative form. But at least learn from me–don’t wait for the library–read it when the mood is right. In fact, if you really love Leviathan, I’d suggest just reading it again, because this pale carbon copy won’t be nearly as satisfying.