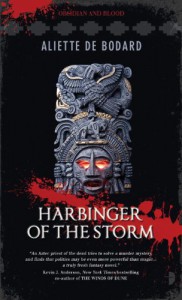 I loved researching and writing ethnographies in anthropology class; the idea of describing cultural norms in the hopes of understanding as well as to speculating on their function in society. A study of a culture’s biology, if you will.  Aliette de Bodard’s series Obsidian and Blood (Bodard’s site) reminds me of an ethnography, but instead of the dry, pseudo-scientific tone discussing a culture in general, Bodard gives us the personal perspective of Acatl, High Priest of the Dead, as he seeks to protect his country from the fallout of a leader’s death. It’s the best kind of cultural story-telling, immersing me in a time and I place I can barely imagine and yet offering non-judgemental insight on ways of thinking and ancient lives.

It begins as the Mexica (Aztec) Empire is undergoing a period of political change. The Speaker, the leader of the Empire, is the link between the Hummingbird God and the people of the Empire. But the Speaker is at the end of his life and his death will break that bond, allowing the star demons and other malevolent gods to intrude into the Empire. The Empire’s only hope is to quickly choose and invest another Speaker, but unfortunately, Council politics stand and power games in the way of a quick decision. When a low-ranking member of the Council is brutally murdered, Acatl, the High Priest of the Dead, knows that this is only the first of many deaths to come.

Characterization is fabulous, with complicated dynamics between characters impacted by character growth. Teomitl, brother to one of the candidates for Speaker, has been Acatl’s apprentice for some time now, and it might be time for Acatl to let him find his own path. There are a variety of adversaries, each providing a different kind of dynamic. There are the star demons and various gods who would like to see the Empire end so that they can take power in their own hands. Then there are the Council members, who may want the good of the Empire–if they get power in it. Their faith in the relationship to the gods may be tenuous at best, so they aren’t as motivated as Acatl to protect the people from the star demons. As Acatl meets each member, the reader gets a sense of a wide variety of motivations in the Council.

Plotting was enjoyable. I found it adequately complex, nicely balancing the spiritual with the corporeal. I tend to get annoyed by dream-walk type segments and appreciated how Bodard balanced the spiritual experience of traveling to the spirit worlds with that of the Fifth World (the one the Aztecs live in). It was one of the most interesting aspects to the writing, the complexity of the situation facing Acatl and his constraints both physical and spiritual.

One of the most fascinating aspects of this series is that by the end, I’m not entirely sure about the supernatural aspects. Apparently, there was a major eclipse about the time this story was set. I don’t doubt that the members of the real Empire believed in the gods and demons to greater or lesser extent, just as they did in the book. But I find myself wondering if the experiences with the gods in the story were ‘real’ or just their interpretation of phenomena, along with dream states/visions. In the end, I don’t know that it matters, but it says a great deal that one can walk away from a ‘fantasy’ book with that sense of possibility. In this way, Bodard did come close to an ethnography, helping the reader understand and interpret the experience the way a member of the culture does.

I enjoyed this one even more than the first. Perhaps it is because I’m a little more comfortable in Bodar’s Mexica past. I’m not even sure what one would name this strange mix of historical, mystery, and fantastical. I just know that it’s a very satisfying read; if you are looking for a different take on a fantasy mystery, the Obsidian and Blood series is a great place to begin. Drawing of Tenochtitlan, from U.Minnesota-Duluth