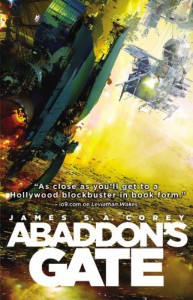 Series OCD: sometimes I has it, sometimes I don’t. Despite the success of the first book, Leviathan Wakes (my review), after the disappointing sequel Caliban’s War (my review), I was all set to walk away from Corey and The Expanse series until friends suggested the final book was a capstone worth reading. I’d agree with that assessment; after the recycled plot in Caliban’s War disappointed, Abaddon’s Gate pulls itself together with an exploration of galactic human politics after the protomolecule has built a giant mystery Ring of material outside Uranus (cue Beavis and Butthead jokes).

Abaddon’s Gate opens per the series norm, with a third person point of view that will soon be abandoned for a four-part narrative. The prologue is a daredevil teen attempting to shoot the Ring in a small spacecraft, speaking in his regional cant and musing on the Ring. Shortly after, narrative switches to Jim Holden, one of the main characters in the last two books. He’s with the crew of the Roci, enjoying a shore leave after their latest contract. When Holden takes a moment, the ghost of Miller appears, cryptically saying, “It happened.” Naomi is the only one who knows Holden is being haunted, and Holden is afraid that if people find out, he’ll be an even bigger laughingstock than he is already. Narrative switches from Holden to Bull, a new voice in the series. Bull is an officer with the OPA, the Belter government, but since  he was originally of Earth, racism keeps him from playing a leading role in the military. Bull is assigned as Security Chief to a former colony vessel, commandeered by OPA for the Ring flight. Narrative changes again to Melba, formerly known as Clarissa, assuming a secret identity in her quest for revenge. Last point of view is Anna, a pastor with a wife and young child who takes a position as part of the UN Secretary-General’s advisory group flying out to the Ring. There’s an uneasy detente at the Ring, with Mars, the Belters and Earth all maintaining a military presence. When the teen shoots the Ring, the Ring reacts, and tensions ratchet up. Holden has no intention of going anywhere near Miller and the Ring, until events force him that direction.

Plot takes some time to build, but proves worthwhile if the reader has patience the political and philosophical issues are established. Part of the background is quickly covered; the authors clearly assume the reader has read the prior books. A great deal of the interpersonal conflict is based on racism that exists between Earthers, Martians and Belters; people are easily stereotyped because of physiological changes that occur with the human form depending on the environment. Those conflicts are fanned by political maneuvering seeking to exploit the resources of the Ring, as well as the resource of OPA’s giant colony ship commandeered from the Mormons by the OPA government. Holden and his antagonist put a personal face on the conflict, and Anna puts a face on the philosophical issues. All in all, it feels exceptionally crafted in a way to appeal to a majority of readers. The revenge plot was initially intriguing, but became disappointing as the deux ex machina started to escalate. It’s also a plot that I have the most trouble believing, and this case was no different. Excessively convoluted, it lacked the flair or joie de la vie one sees in Scott Lynch’s Gentleman Bastard series or in an Oceans Eleven set-up.

Characterization was acceptable and consistent. The naif Pastor Anna was a little bit of an eye-roller with her “every one can be saved” sentiment. Bull was entertaining, not so much in character, but because his determination to follow the letter of the rules but not the spirit gave interesting insights into the military set-up. What stood out was the cohesiveness of the Roci crew. Their teamwork and acceptance was enjoyable, from joking around a bar to brainstorming solutions to their latest debacle. Holden has decided to abandon his responsibility for the world and focus only on his crew and Naomi, which results in needing to re-learn a lesson from the last book; thankfully, that sub-plot was short-lived. Melba was somewhat of a weak point; her personality felt insecure and whiney instead of truly obsessive.

Melba’s personality breakdown near the climax was unsatisfactory, partly because there was so little build-up of a rigid and obsessive personality. Then, in a high-crisis situation, her viewpoint is dropped as she becomes a pivot point for everyone else. While it seemed awkward, it was redeemed at the very end of the book. I found the end scene on the Roci particularly fascinating and provoking. Some might feel it leaves a loose end or two, but I rather like it.

Strangely, for all the focus on the Ring, there’s very little focus on the science, mechanics and impact of the Ring. It remains a philosophical point. At the finale, I felt like the book turned into an Aesop’s fable, action scenes notwithstanding. However, Miller’s provides an excellent summation with his pronouncement, “I keep warning you. Doors and corners, kid. That’s where they get you. Humans are too fucking stupid to listen. Well, you’ll learn your lessons soon enough, and it’s not my job to nursemaid the species through the next steps.”